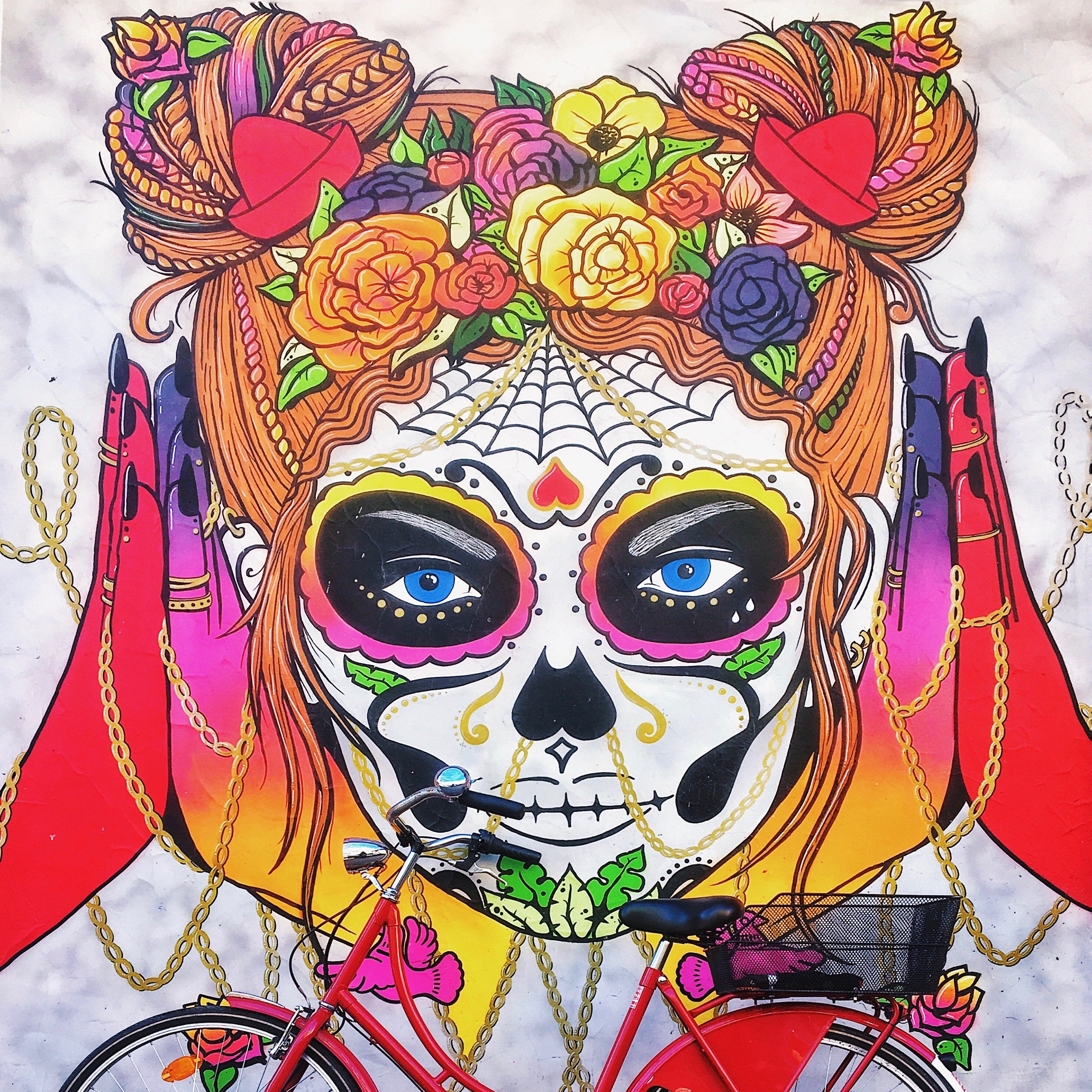 Hamburg’s best art exhibitions can be found on the streets. On facades and walls in places like the Sternschanze, Altona, the Gängeviertel, St. Pauli or Ottensen. No entrance fees, no price tags, rich colours, great motifs. Some come and go, many stay. Ready to visit the gallery of my current favorite works? 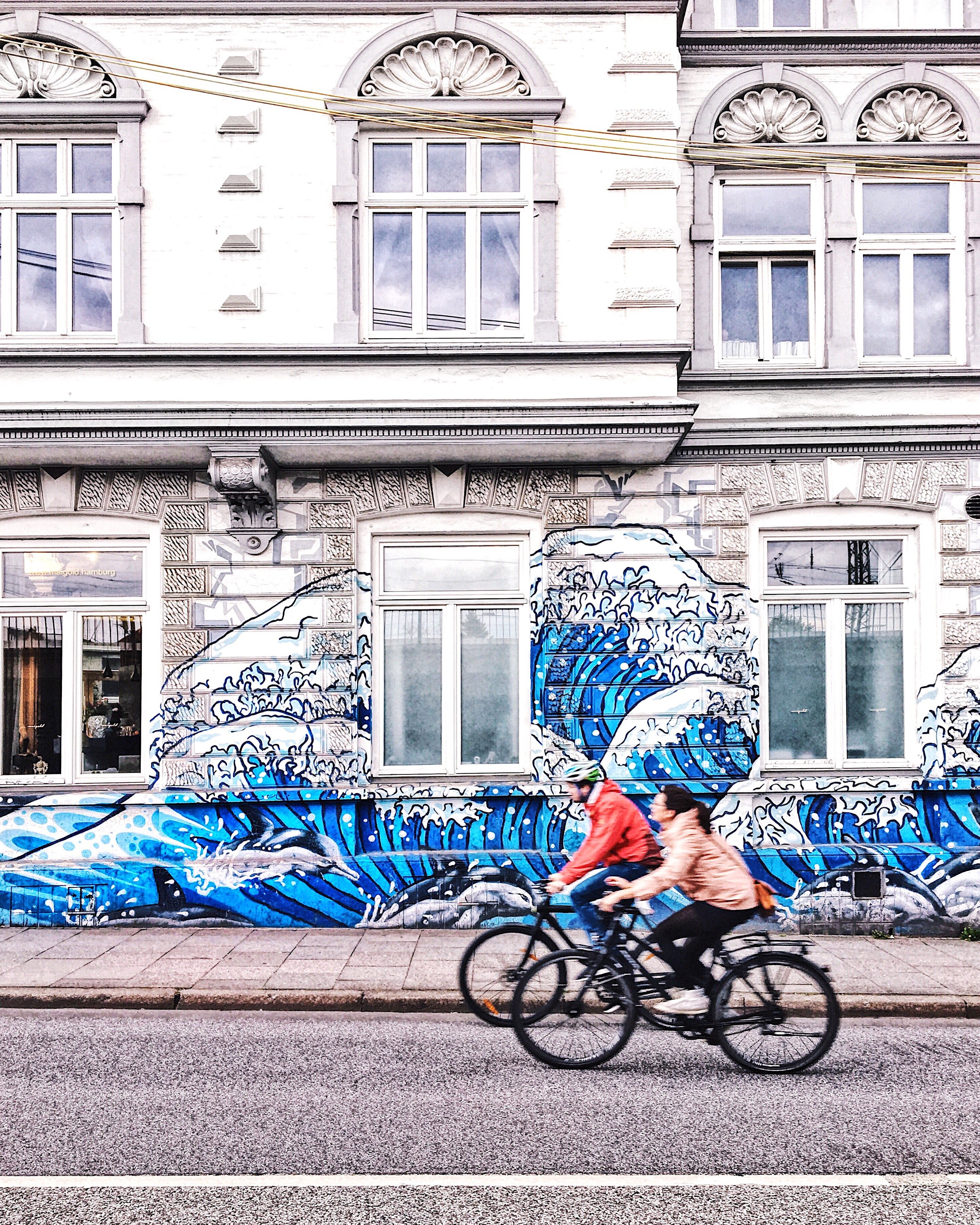 The big wave of Ottensen

Inspired by the Japanese artist Hokusai (1760-1849), this wave sloshes along a beauty salon on Barnerstrasse in Ottensen. The Japanese artist would certainly have liked his motif of the „Great Wave of Kanagawa“ to appear as graffiti art on a house wall. He was considered an experimental artist and also invented the genre of manga with his horror comics. I like the blue colors of this street art work. Blue was obviously also Hokusai’s favourite colour for a longer period of time. He had it specially imported from Europe for his original woodcut of the wave as a synthetic dye called „Berlin Blue“. 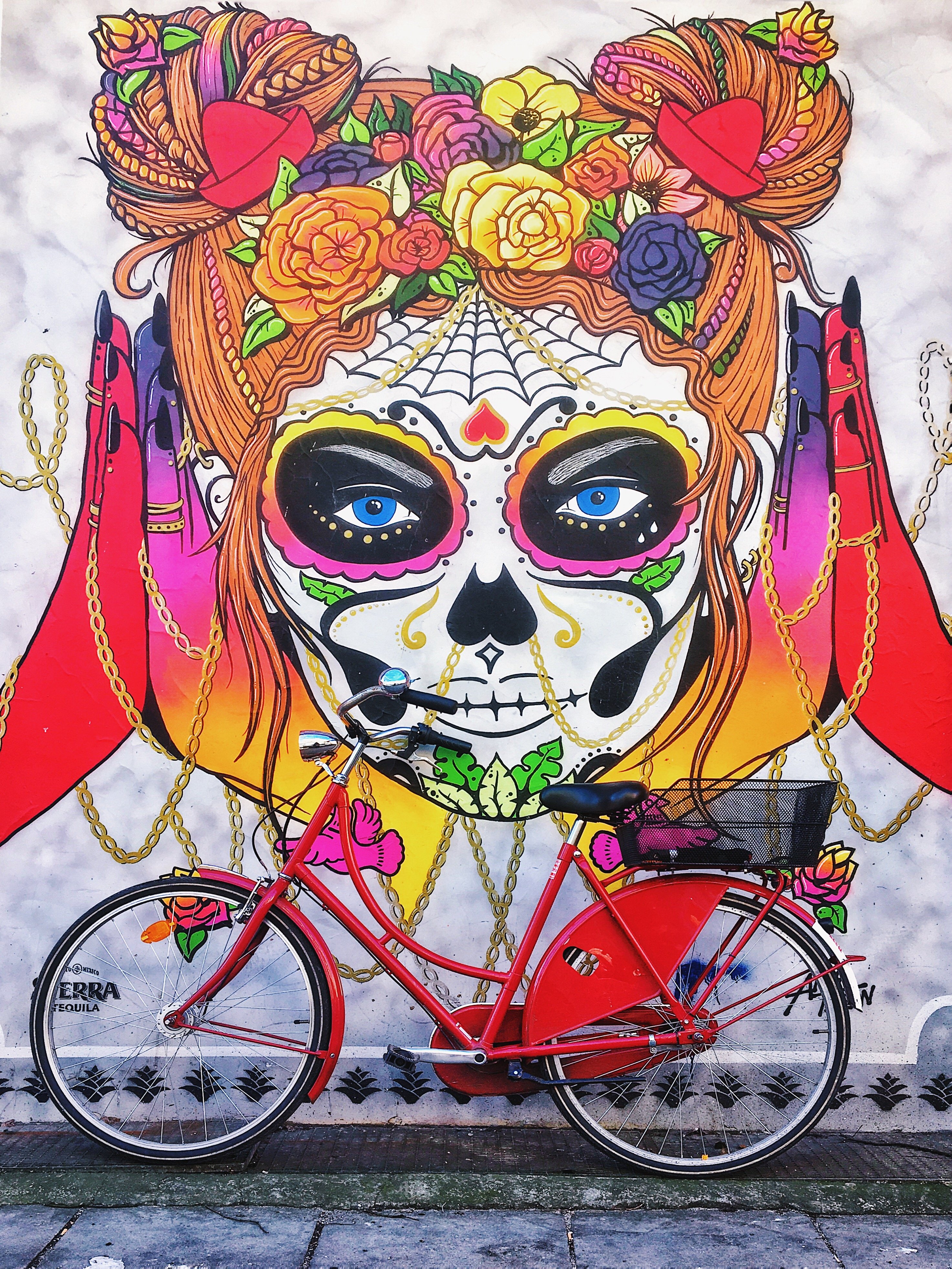 Death is female, colourful and lurks at the back of the Roosen Bar (St. Pauli). This „Mural“ (mural) shows „Santa Muerte“, a saint who is said to be paid homage to mainly by members of criminal circles in Latin and South America. The work of art comes from the spray cans of the Hamburg artist Anna T-Iron, who created it in 2015 on the occasion of the Mexican funeral festival on behalf of the spirits brand Sierra Tequila. Anna’s colorful style can be found not only in Hamburg, but all over the world, which she documents on her Instagram account. This video shows exactly how the „Santa Muerte“ of St. Pauli was created: 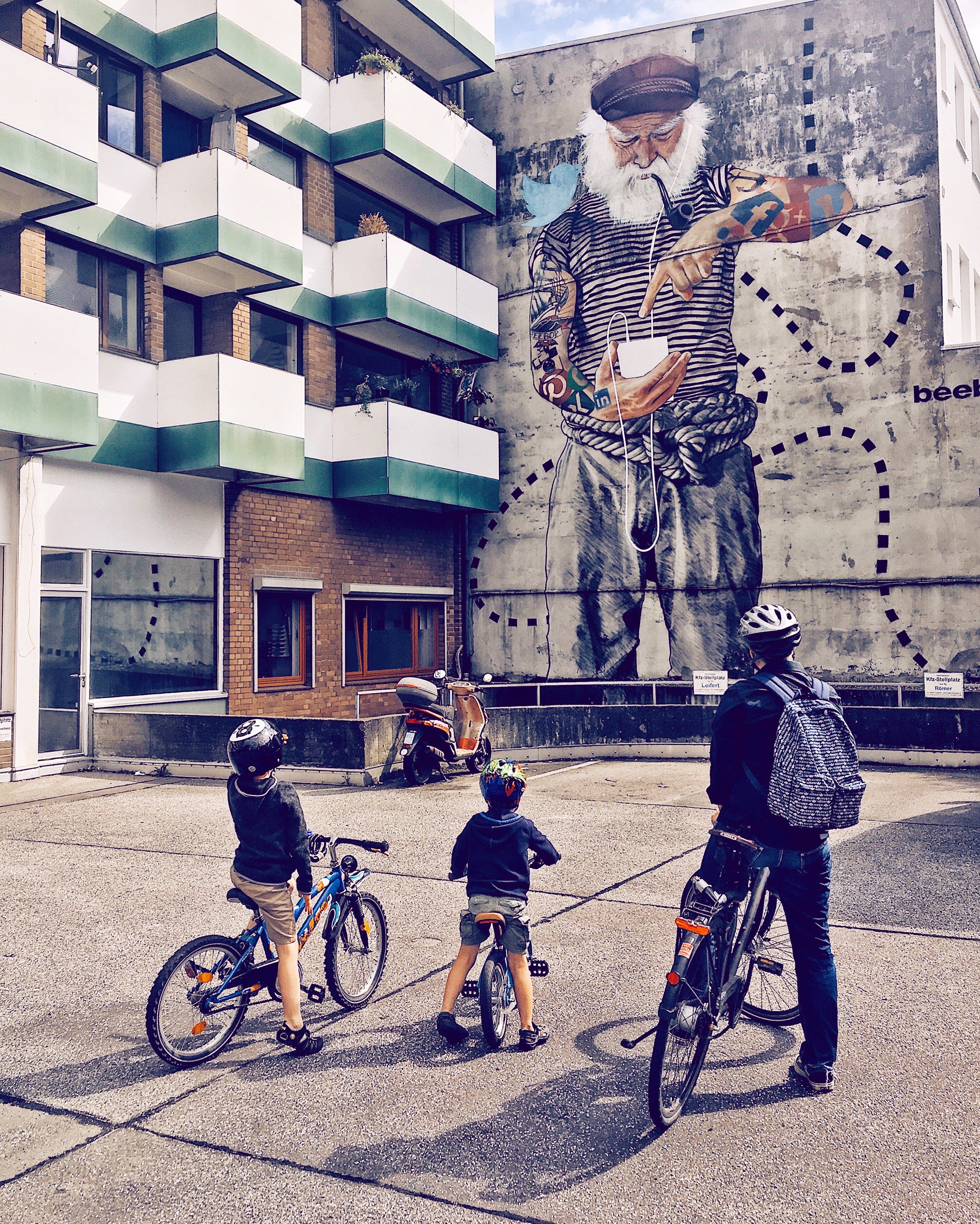 A last real sea man hides in a backyard of the Sternschanze, between no. 57 and 69 in Lippmannstraße. Innerfields, a trio of Berlin artists, put him on the wall. And there is also a great video about the evolution of their work: 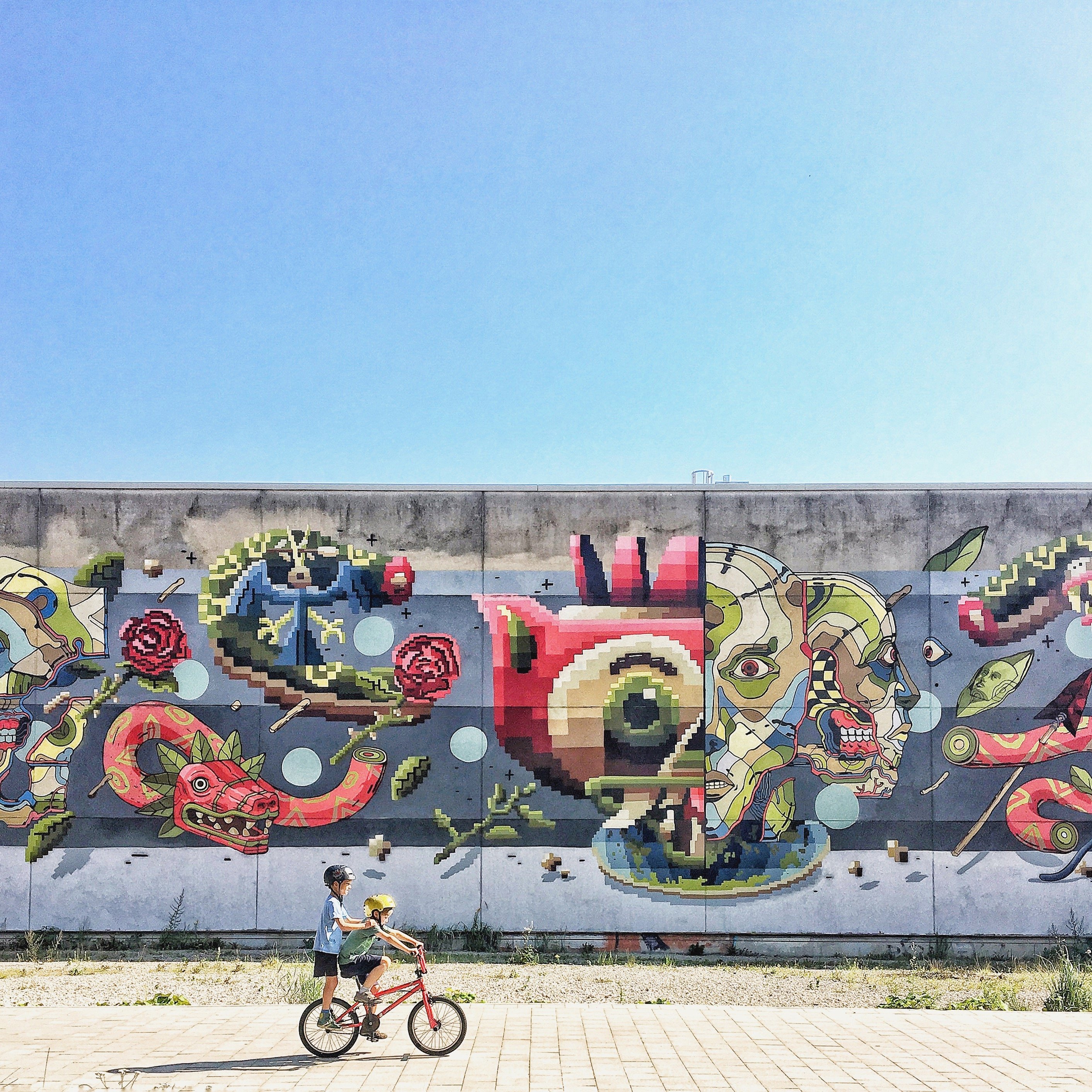 A wall of tolerance and humanity

This partly pixelated world of dragons and other fantasy creatures is a collaboration of the two artists Dennis DTXR  („the weird“) and Smithe. It can be found on a wall at the back of the Thalia Theater in Gaußstraße in Ottensen/Bahrenfeld. It was created in June 2017 during the first German-Mexican Urban Art Festival Cartel del Arte, at which various artists from Mexico and Germany met. The wall picture is a symbol for tolerance and humanity. 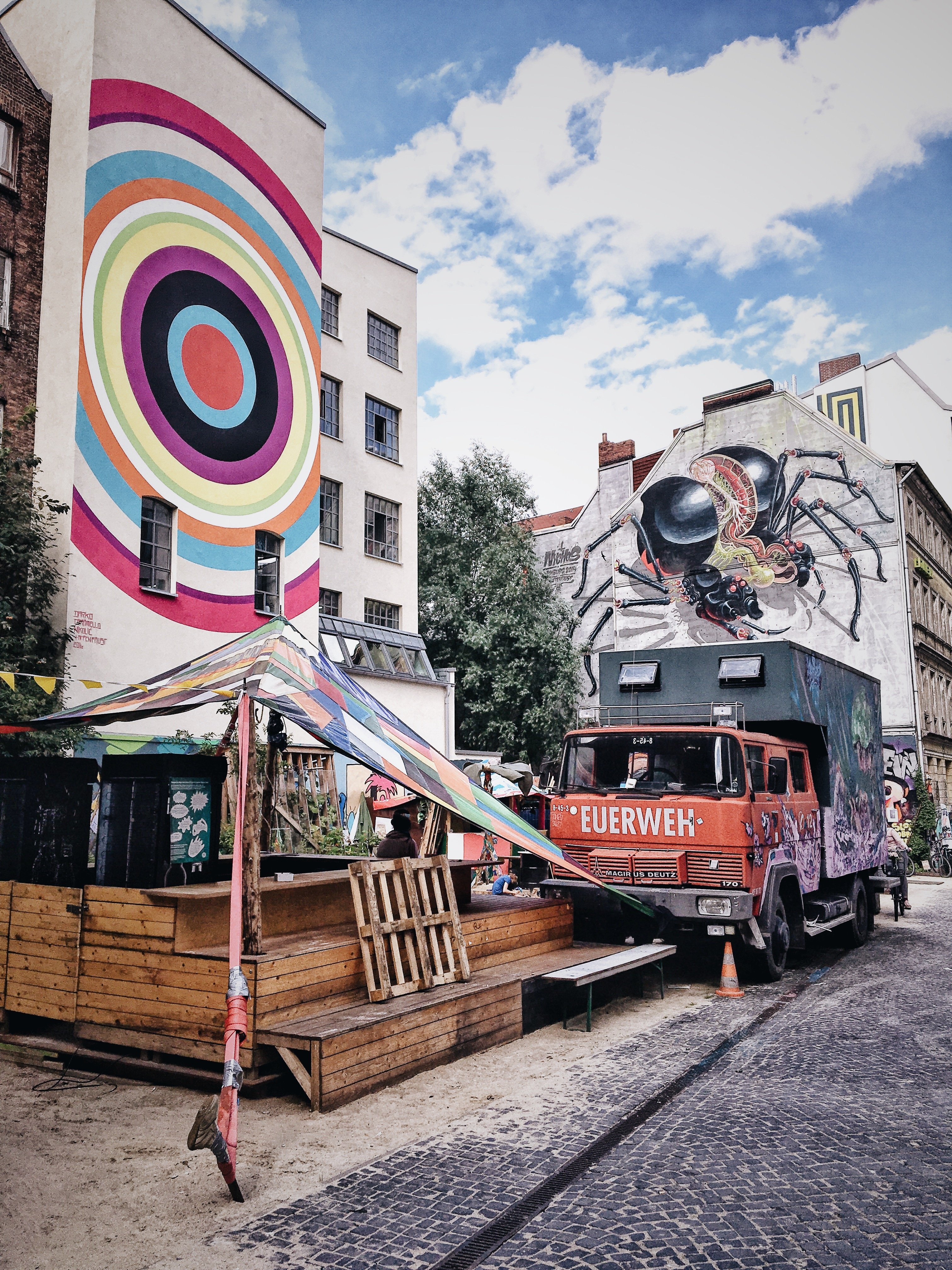 Before the First World War, the Gängeviertel was a slum, then the centre of Jewish life. Today it is home to the cooperative “Komm in die Gänge”, which uses the place culturally and above all artistically. While walking through the quarter, a real treasure trove of street art, you will spot a huge spider crawling over a house wall. The arthropod of Speckstraße is the work of the Austrian graffiti artist Nychos, specialist for the inner life of animals. 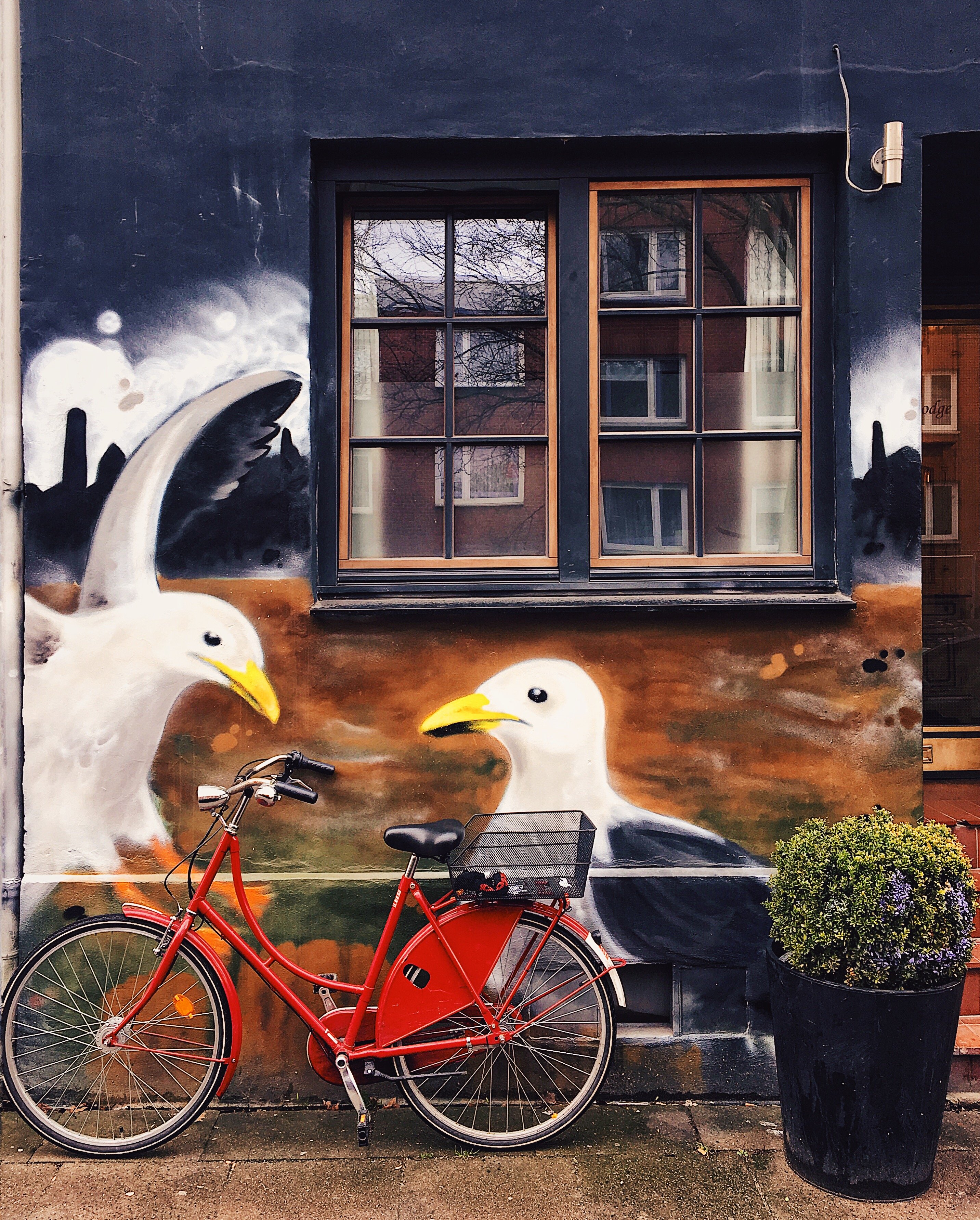 Quite often I meet them: the two gulls on the wall of the St. Pauli-Lodge, a small B&B on the edge of St. Pauli, my immediate neighbourhood. There are said to be 3000 gulls in Hamburg, most of them are normal gulls. But more and more black-headed gulls are joining them. Why? These animals migrate from Eastern Europe. Due to the increasingly mild winters, they no longer move southwestwards to France or Belgium, but save the long way and settle down at the Elbe instead. 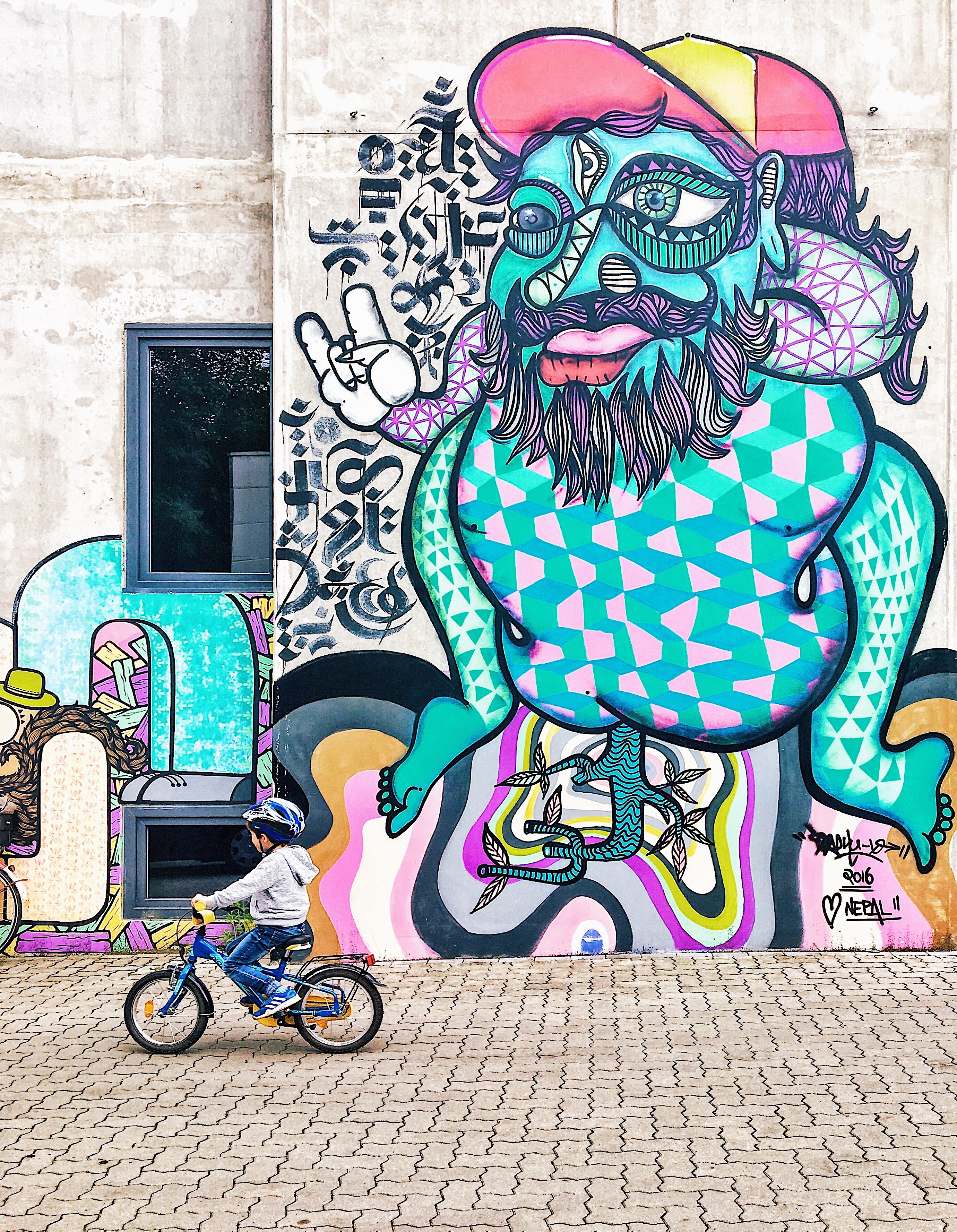 Nepalese streetart at the craftsman’s yard

The Handwerkerhof Ottensen is a cooperative-like project with a building on the corner of Bahrenfelder Straße and Gaußstraße, which is used by a collective of various trades and businesses. Since 2016, one of the outer walls has been decorated with a mural by two artists from Nepal. A deity? A mountain ghost? I don’t know. But one thing is for sure: It looks damn good and lifts your mood on the spot! 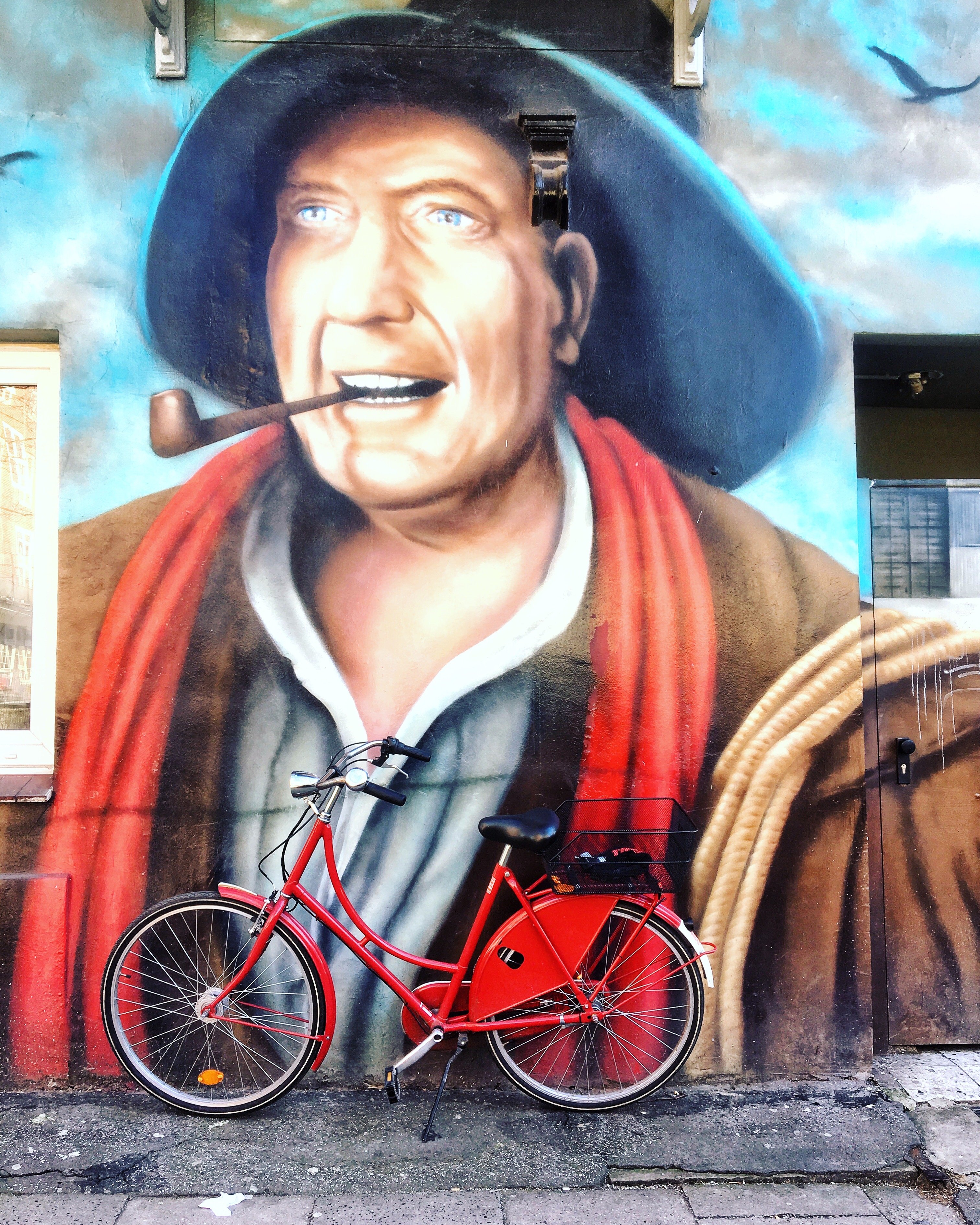 Especially the film „Große Freiheit Nr. 7“ created the romantic image of Hamburg’s red light district after the war. The North German blockbuster also made a blond guy with a hypnotic gaze and a ship’s piano a star who sang fervently about the heart of St. Pauli and the sea as the sailor’s eternal bride. Even today, the songs that Hans Albers made famous still play in jukeboxes of neighborhood pubs. In Hein-Hoyer-Straße an artist unknown to me has also set a beautiful monument to Hans. 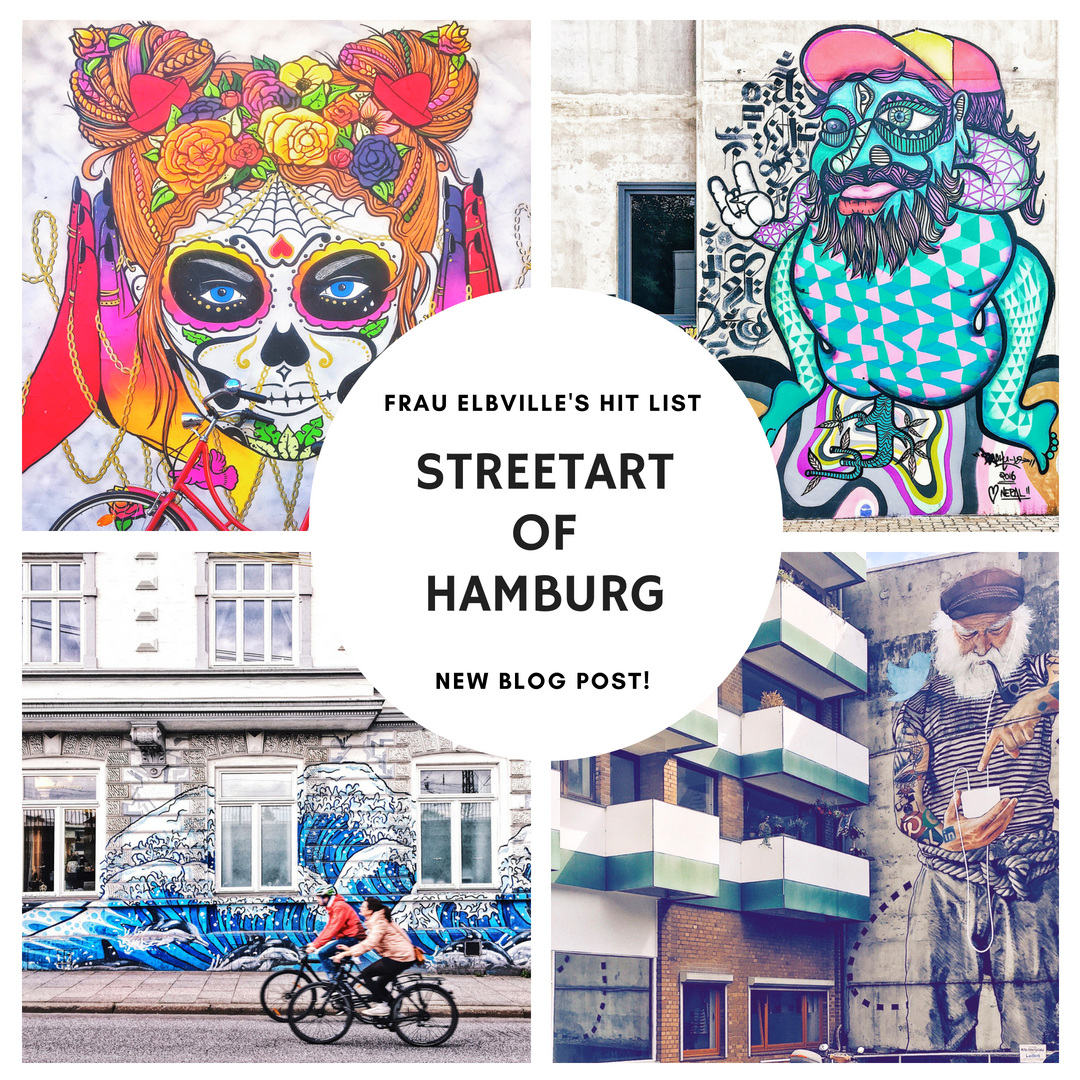