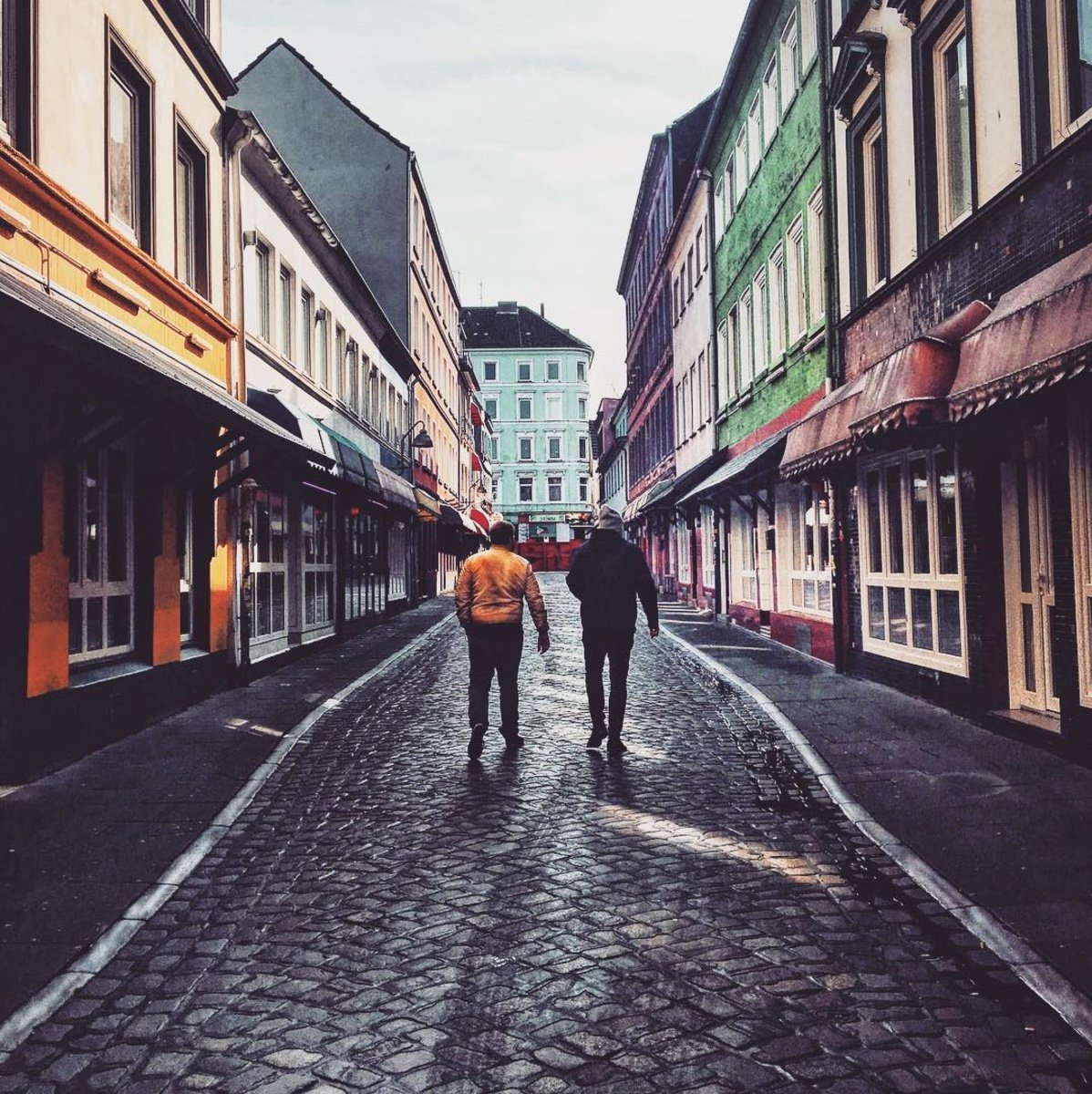 Most people only know St. Pauli bars and the Reeperbahn district during the night. Some might still be around when the sun is rising and the first birds are chirping. But then acute tiredness or a beginning hangover usually have the consequence that one rather looks around for a taxi instead of looking at buildings. In spite of its dirty licks, however, the neighbourhood and especially its bars and pubs develop their own charm in daylight. Dear children of the night, see for yourself! 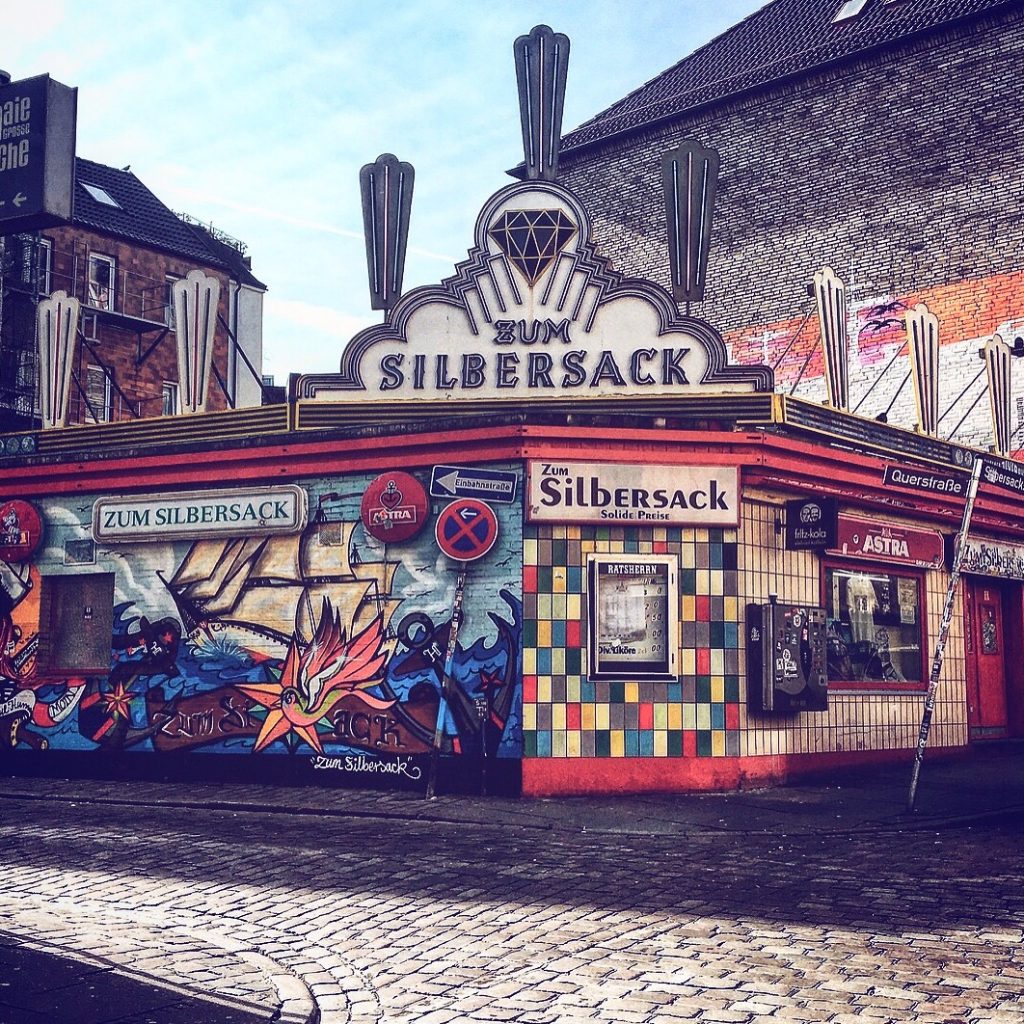 Erna and Friedrich Thomson created this St. Pauli pub on their own during the post-war years. The couple had bought the necessary boards from a forest ranger – for a bucket of honey and a bicycle. It was not until later that the Silbersack’s facade was covered with its famous tiles. Friedrich died of cancer in 1958. But Erna, mother of three, wouldn’t give up. Until her death in 2012 she stood behind the counter. Now the new boss is called Dominik. But luckily he kept the old furniture, the chequered curtains and the original jukebox of Erna and Friedrich. In this institution time stands still – but the desire of the guests to party hard in a typical St. Pauli night has remained the same. 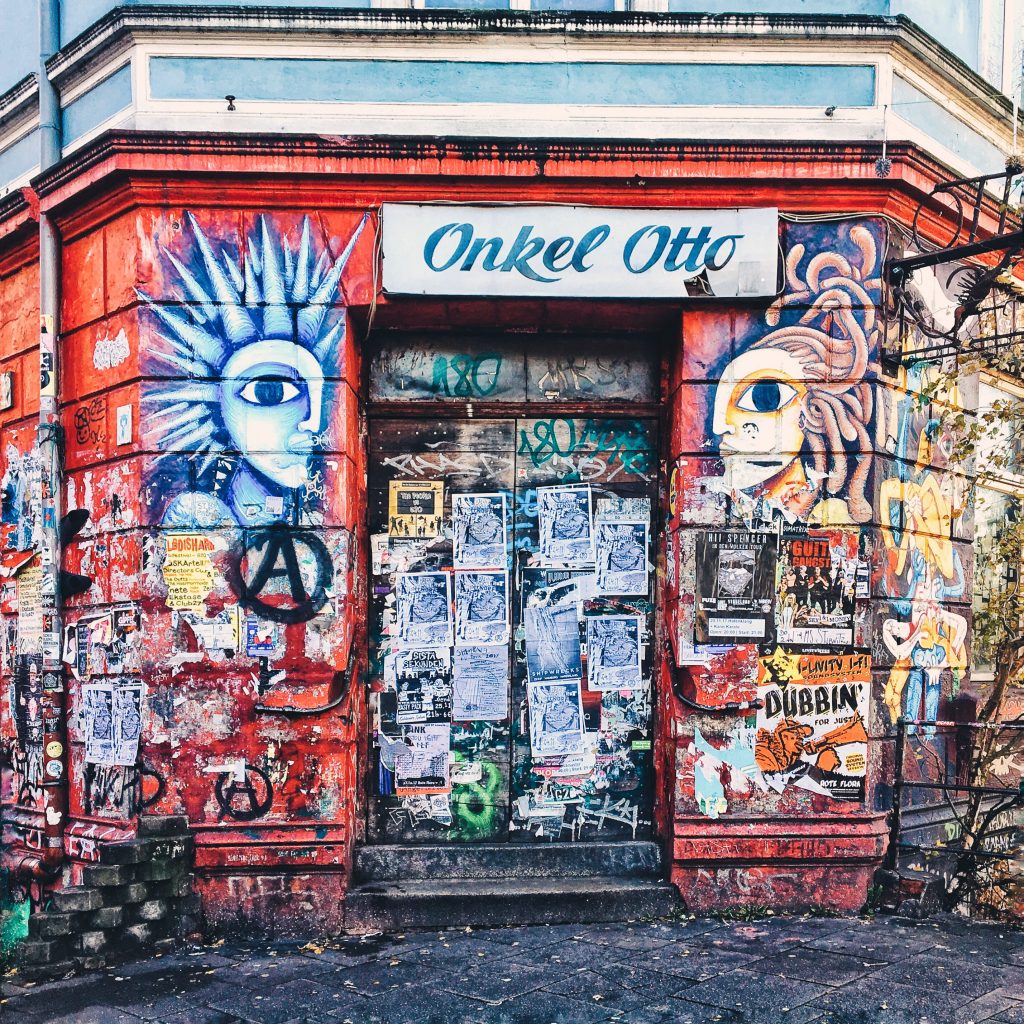 A little rancid on the inside and outside. Wall art from a spray can, punks, autonomic people and a few normals, beer at very humane prices: Uncle Otto welcomes its guests in Bernhard-Nocht-Straße, directly at the Balduintreppe down to Hafenstraße, in one of the infamous houses that have been occupied since the eighties. Listen to hard punk sounds while playing at the football table of this St. Pauli bar. Or indulge in the good old days when people thought the word „Gentrification“ was still a rare disease. 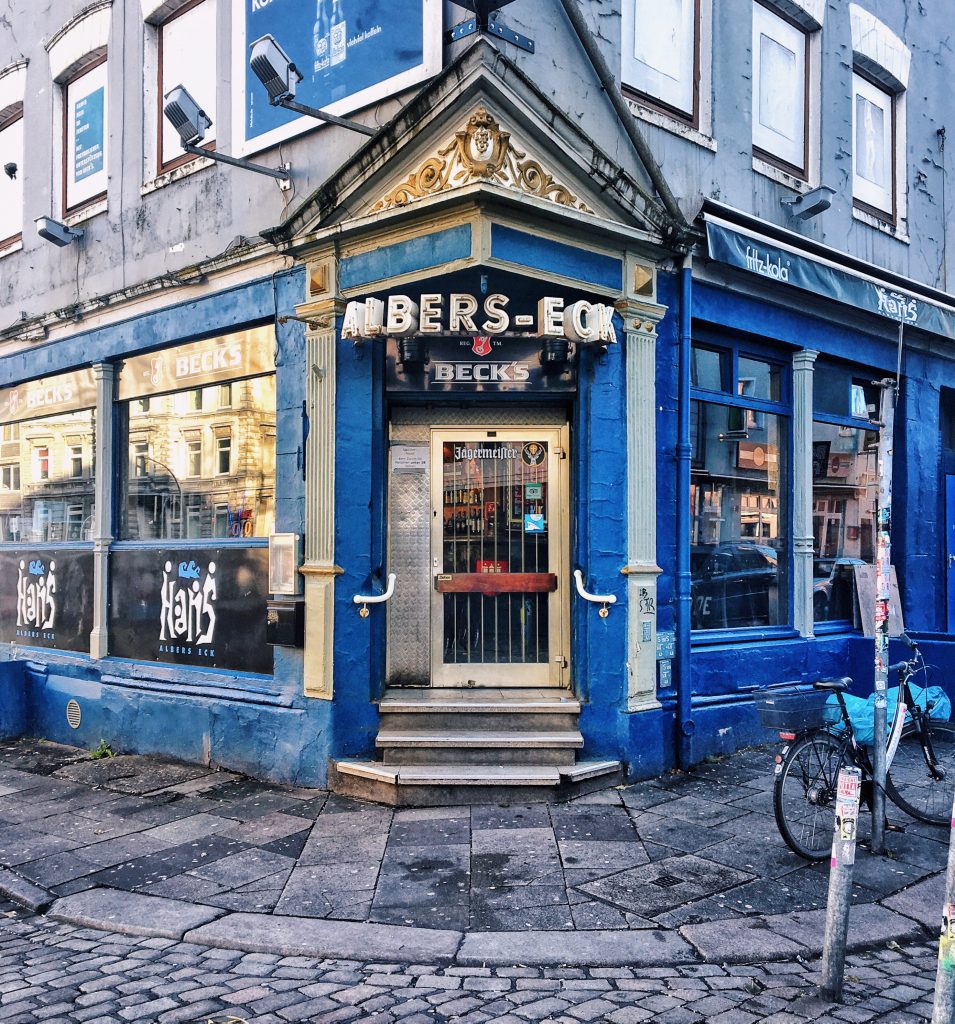 Something like the Ballermann – just not on Mallorca, but in the heart of St. Pauli, in a place called Wilhelmplatz that was renamed „Hans-Albers-Platz“ in 1964 in honour of the probably most famous actor of the city. There used to be pimps here. Today, there are classical pubs all around like the Albers-Eck. Inside this one it’s loud, humid, narrow and cheerful. A cage full of party lions. Those who are not deterred will fight their way to the upper counter of this most famous oft St. Pauli bars, the bow of a Hamburg tugboat. That’s why there is a permanent danger of „getting towed“ by the opposite sex! Until dawn. 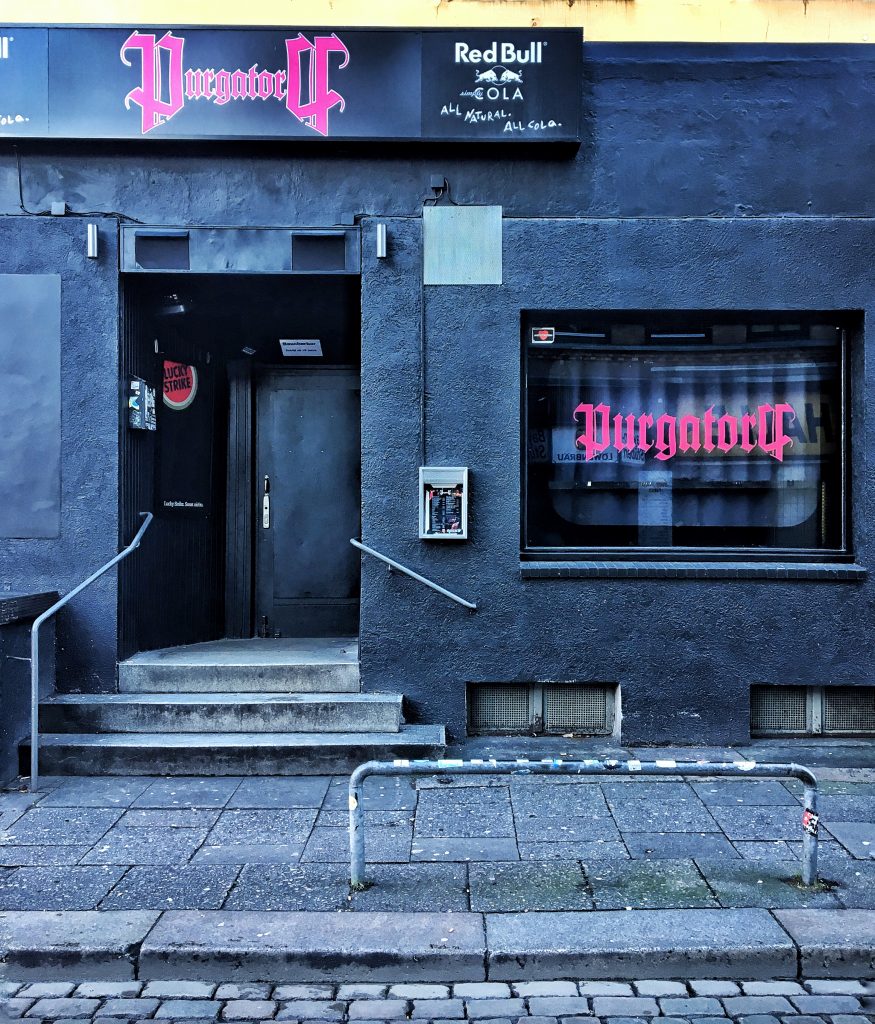 This electro cave, founded in the 90s, has consistently refused to undergo any changes. You still listen to house music for the dark soul, even though the lettering outside is reminiscent of heavy metal. Inside it’s a small, hot and plush place as ever. The audience: slightly bizarre, but amiable. For some of Hamburg’s young-at-heart technonauts, this St. Pauli bar on the south side of the Reeperbahn has been a second living room for decades. 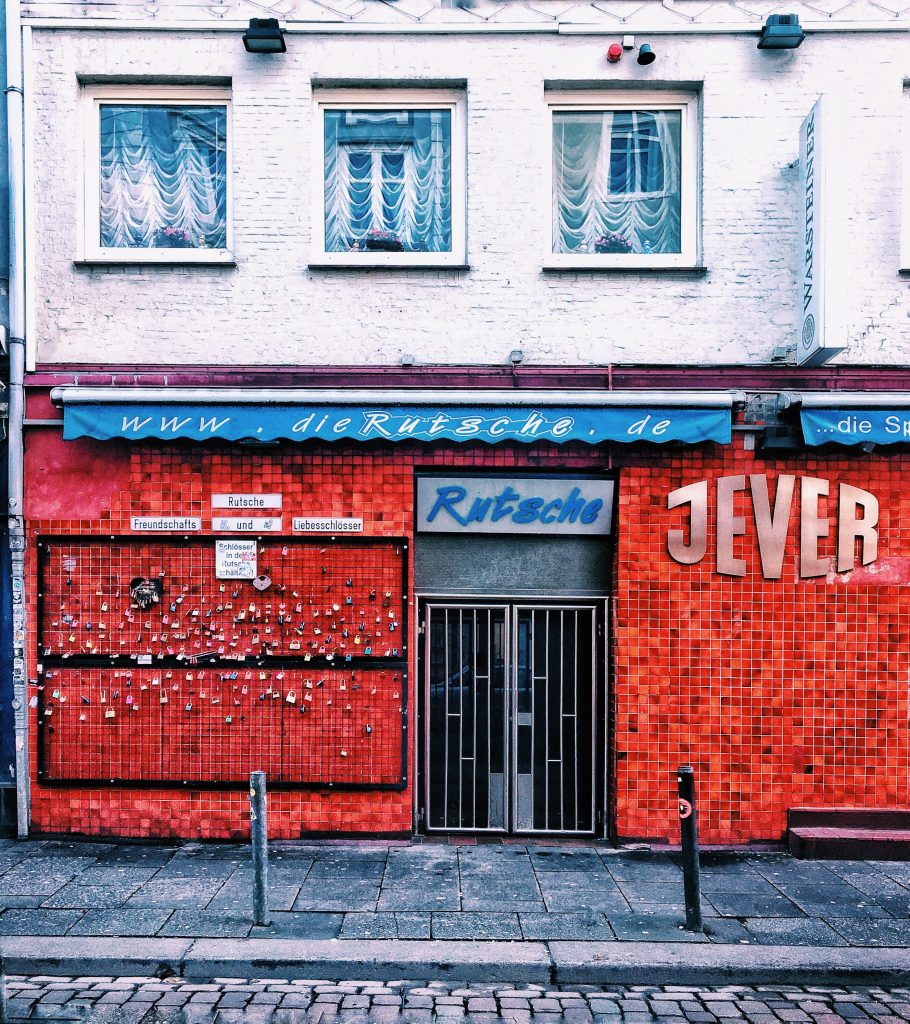 Fire red tiles, some tulle curtains above. And the question: Why „Rutsche“ (slide)? The owners of this so called „Spasskneipe“ not far from the Purgatory in Friedrichstraße explain on their website that the name has its origin in the saying „Give me a slide!“ However, I’ve never heard that one before… Fun Fact: in 2002 the „Verbotene Liebe“actor Carsten Spengemann is said to have worked behind the counter of this St. Pauli bar. There is another question that comes to mind: What is Carsten Spengemann up to today? 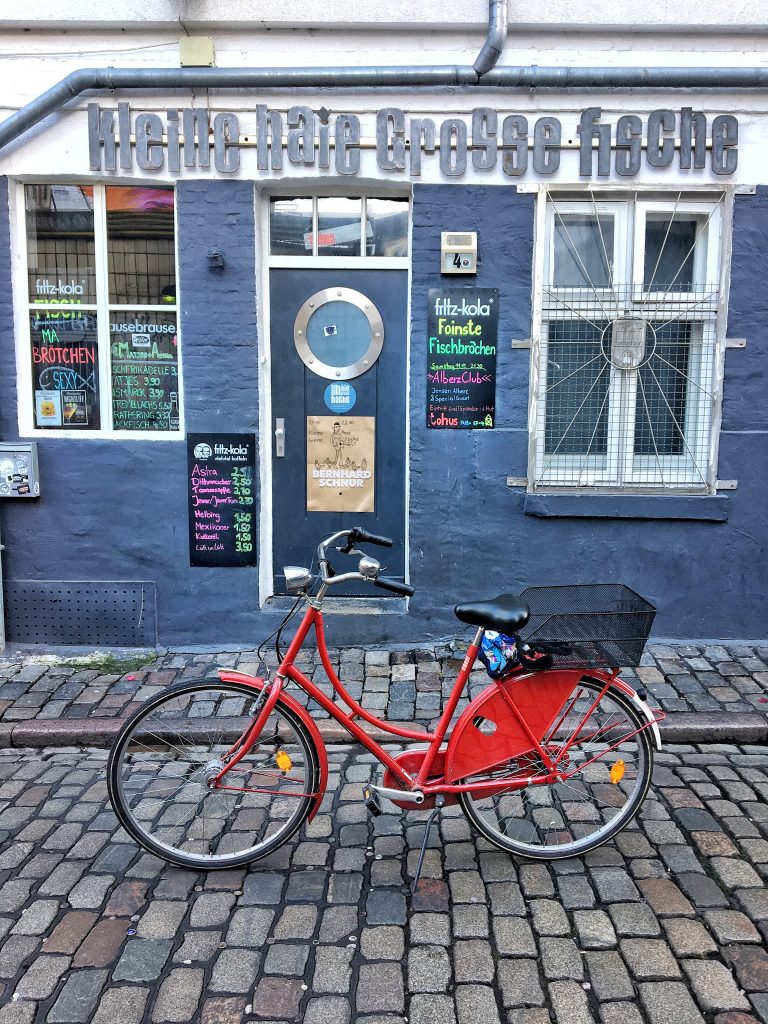 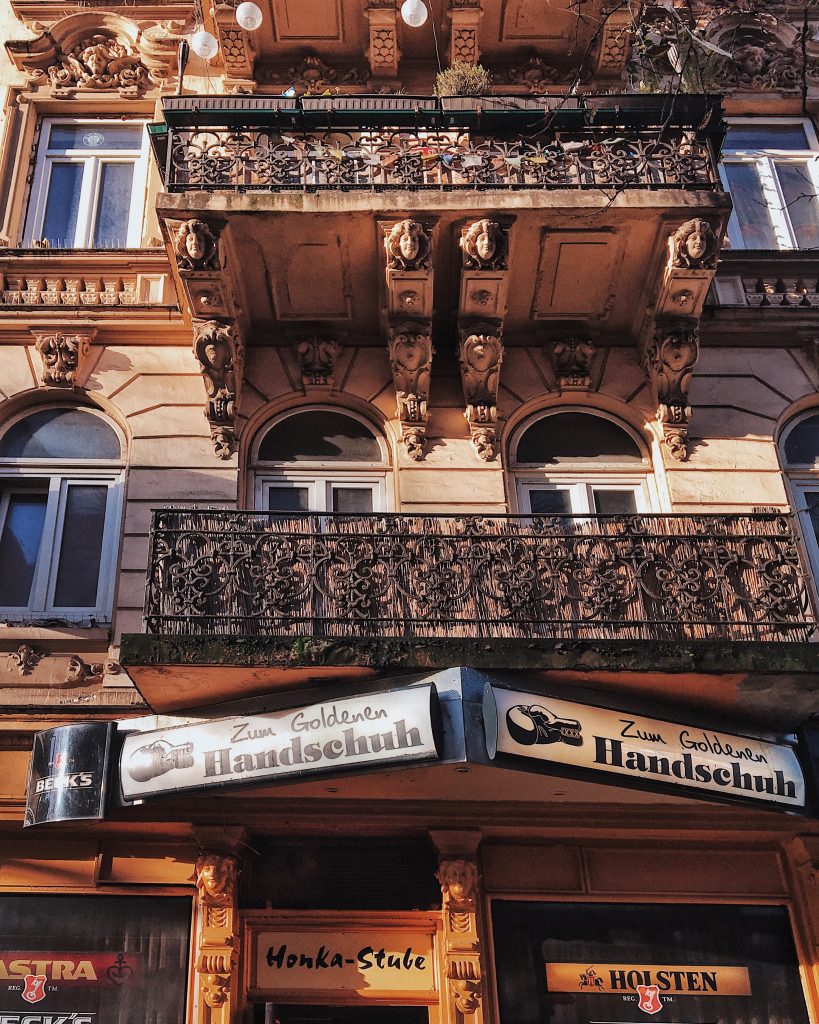 Since 1962, the Handschuh, which looks like a Parisian café during the day, has been open 24 hours a day, 365 days a year. Here its most famous regular, the fourfold murderer, Fritz Honka, got to know his later victims in the 60s and 70s. About a year ago Heinz Strunk published a novel about the Honka-Stube. But despite the attention, almost nothing has changed in here. On the weekend party people come, during the week it’s the hangout for regulars, prostitutes, pimps, millionaires, the unemployed. Now Fatih Akin wants to make a film based on the Strunk novel. I wonder if everything will still be the same after its release… 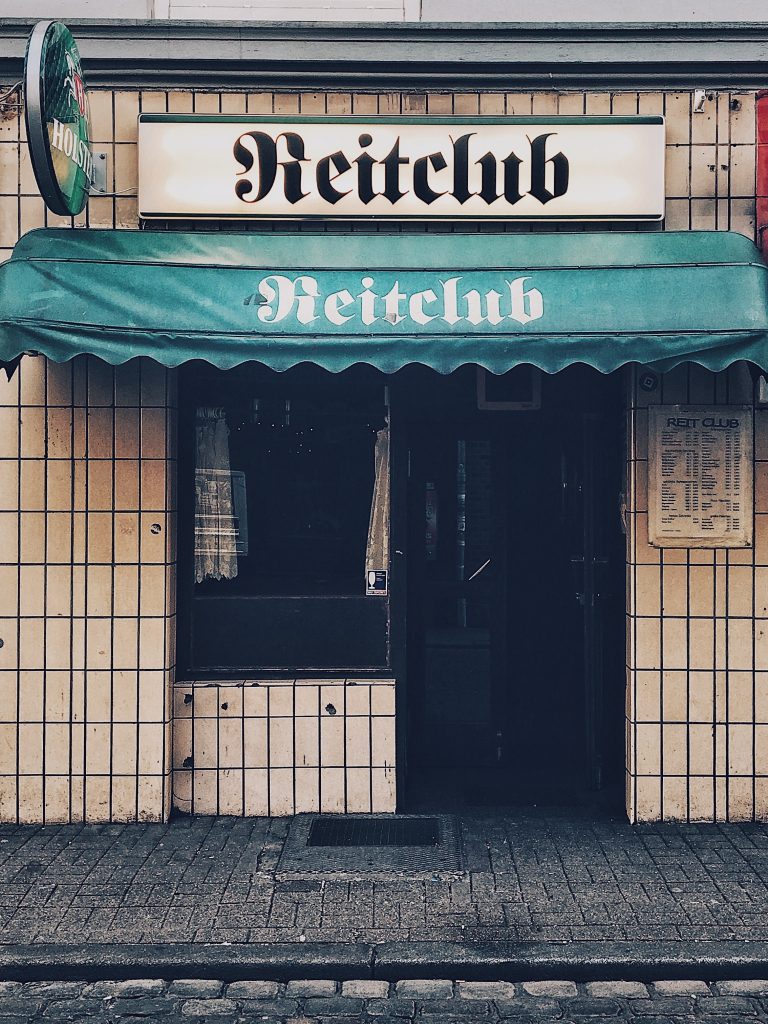 By far the best name belongs to this classical St. Pauli pub in Gerhardstraße around the corner of Hans-Albers-Platz. The Reitclub owner is said to have lost the key to the entrance door years ago. Instead of installing a new lock, he decided to leave his bar open around the clock. To this day there are no new door keys…

→ Gerhardstraße I open 24 hours I map 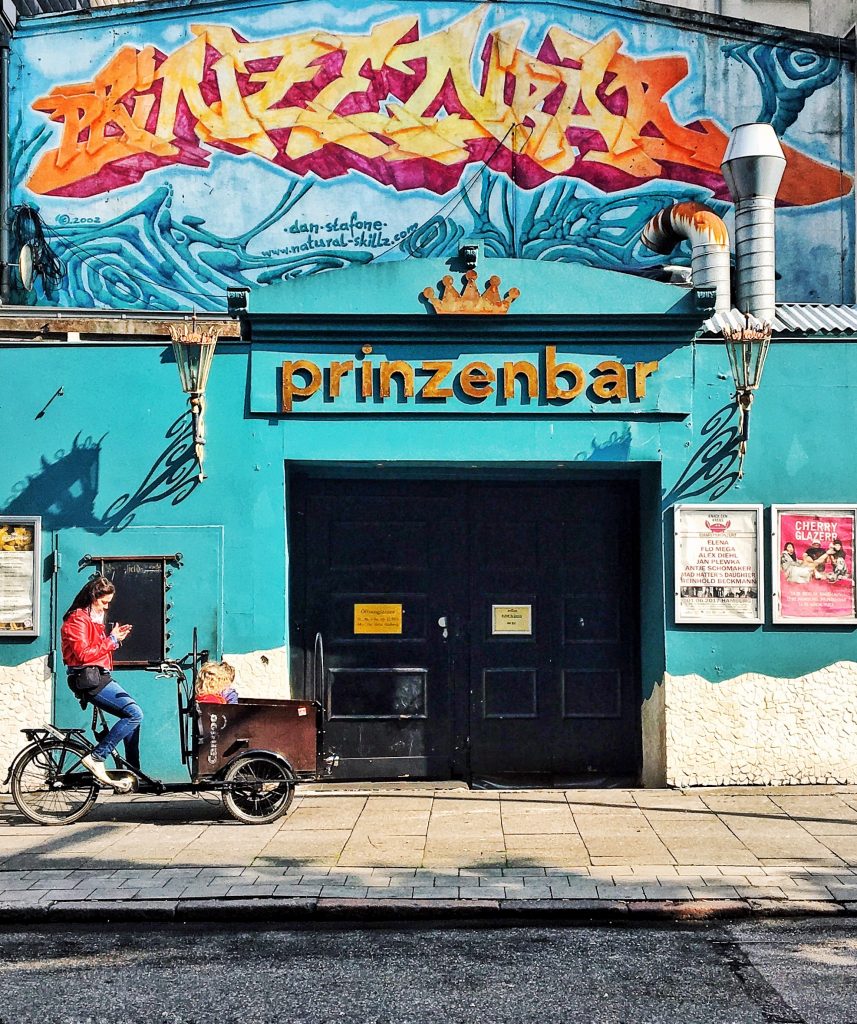 The Prinzenbar is located at the Kastanienallee on the back of the concert hall „Docks“. On the outside, the little sister of the big Docks looks modern, but inside it is decorated with mighty Art Nouveau ornaments, original putts and chandeliers – you wouldn’t guess from looking at them that wild concerts and disco evenings from indie to electro take place here on a regular basis.