Who likes to stand on platforms and wait for the train? Me! At least when I’m at one of the most beautiful subway stations in Hamburg. Then even an impatient person like me won’t mind waiting… Let’s go underground in Hamburg – I’ll show you some real architectural art works! 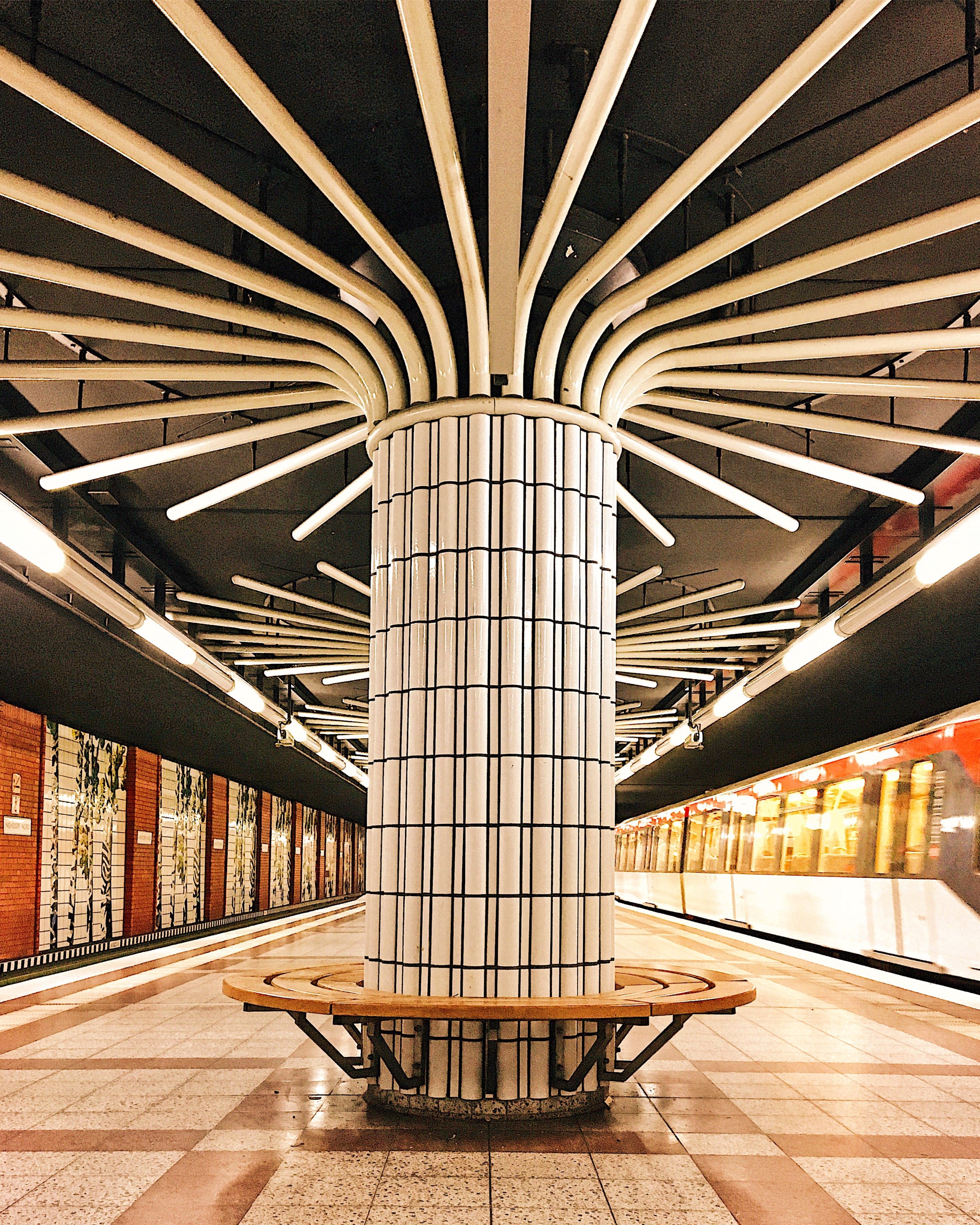 Get off, please! This is the last station of the line U2. Under terraced houses and a small shopping centre, it has connected Hamburg’s northwest to the metro network since 1991. To be honest, I only landed here by mistake because I confused the stop „Niendorf Nord“ with „Niendorf Markt“. But then I was totally surprised by the concept of the station: The pillars with the curved tubes are birch trees, and birch trees can also be found on the tunnel walls. You think you’re standing in an underground forest!

Anyone with a penchant for the cubist forms of Art Deco will think of Klosterstern as a gem: this station is one of the few in Hamburg that still looks like when it opened. The station, designed by Walter Puritz, went into operation in 1929 and is now a listed building. It is interesting to note that only a few stations on the U1 line still have their original identification colours: Jungfernstieg, for example, was kept in red and old white until 1975, Stephansplatz until 1973 in light blue and old white. Only Hallerstrasse and Klosterstern are still dominated by their original colours: light yellow and light olive or light green and old white.

The Landungsbrücken S-Bahn station is built close to the water. And yellow tiles with blue wavy patterns symbolize the proximity to the Elbe. On the columns in the middle of the platform you can see anchors in tile pattern. This ceramic art is the work of the Hamburg painter Hans-Günther Baass (1909-1991).

The „HafenCity University“ subway station is constantly changing colours, sometimes red, sometimes blue, green or orange. This is ensured by the 280 coloured LEDs in the containers floating above the platform. The lighting mood sometimes even adapts to the current weather. On top of that, seagull screams and harbour noises are heard at the entrances and stairs of the station. Every hour between 10 a.m. and 6 p.m., music by Bach, Verdi or Brahms is played to the beat of a colourful light show. Who needs „Lion King“, please?

The subway station Feldstraße, located in front of the St. Pauli Stadium, belongs to the U3 line, which was opened in 1912 as the oldest ring line in the city. From the outside, the stop looks rather unspectacular. But when the sun shines, its interior turns through the rays of light and colorful windows into a three-dimensional Mondrian painting. 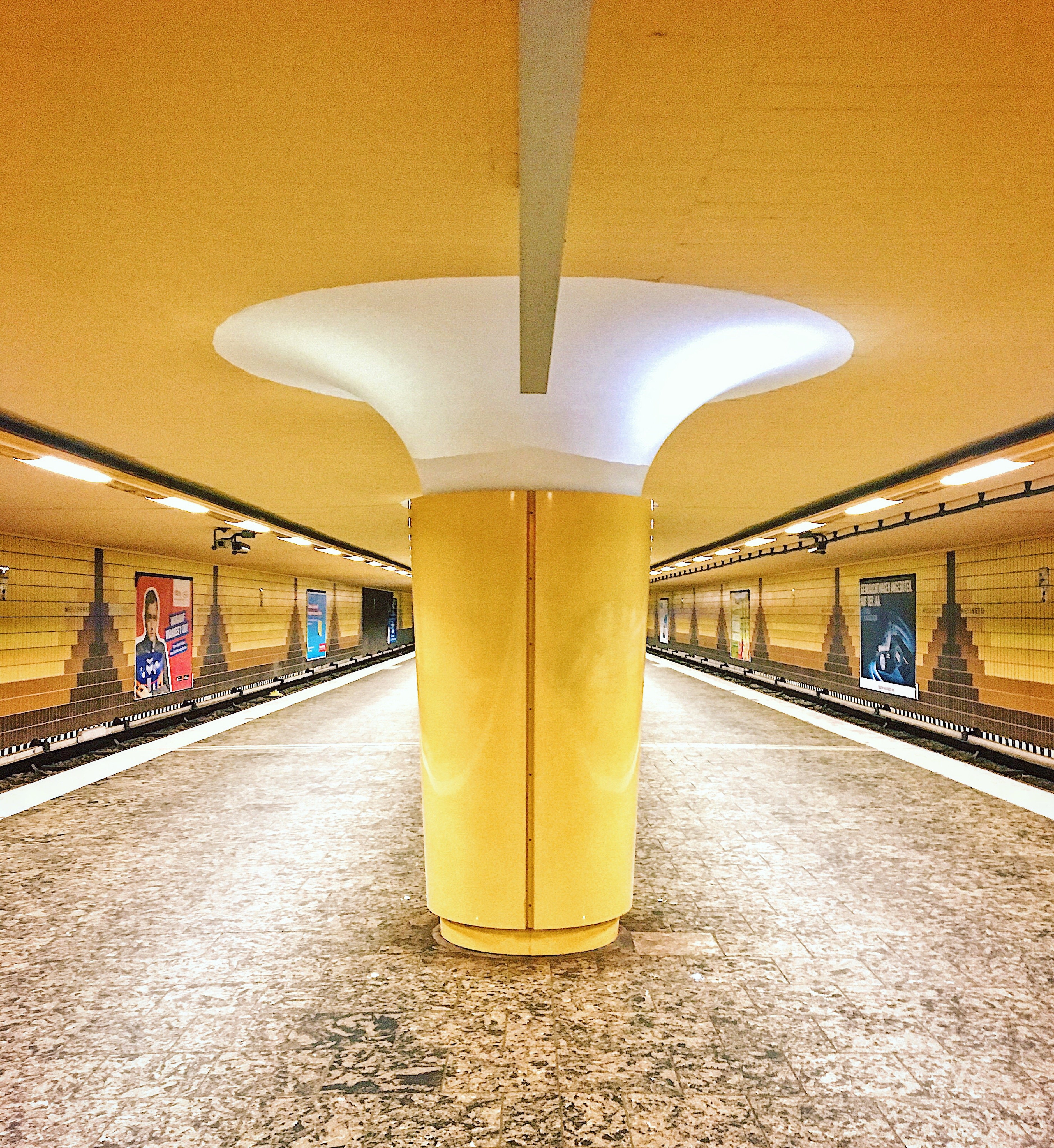 Werner Panton reminiscence! This yolk yellow vintage dream welcomes you at Messberg, and it is hardly surprising that this station went into operation in 1960. A little digression: Do you know where the name Messberg comes from? The literal translation is „dung heap“ – in fact the people of Hamburg used the place above the underground station in the Middle Ages to store garbage…

All right, let’s go for a swim! Überseequartier station is in fact not a station, but an „abstract underwater world“. At least this is how its architects describe it with almost poetic words: „On the walls, the depth of the sea appears as a dark blue that dissolves upwards. The bright and moving water surface floats above it. Passengers are immersed in the vastness of the sea“. The platforms are made of iridescent concrete, „which rests like a light sandbar in the middle of the blue oceans“. I must confess: It works! Whenever I glide down the escalator into this blue abyss, I have to be careful not to get into a deep euphoria. 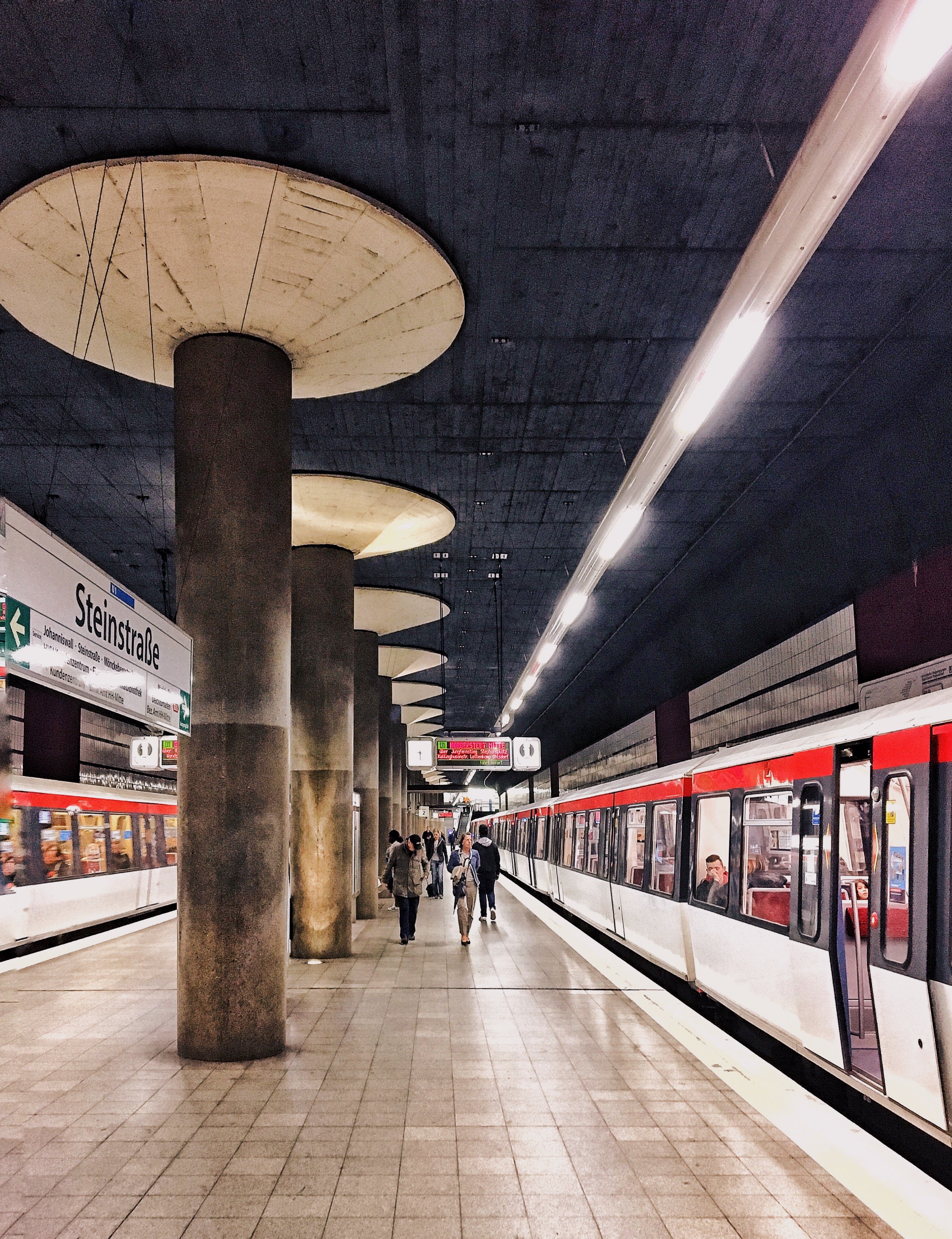 The subway station Steinstraße was also opened in October 1960, as was the station Messberg. The platform hall is reminiscent of a columned palace! Maybe the pillars have some tree trunks, too. Or oversized mushrooms. I wonder if they’re magical. 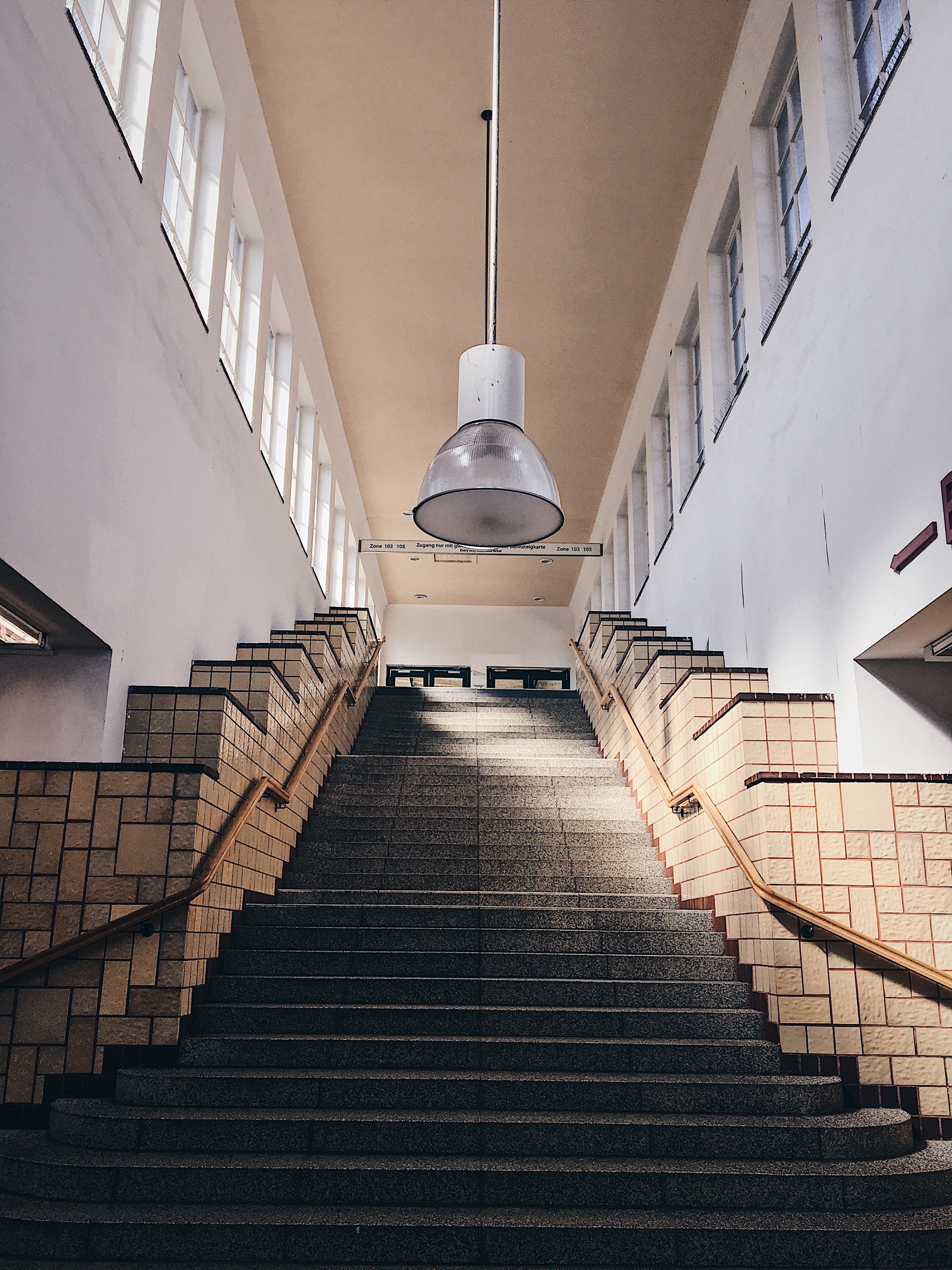 When this stop opened in 1912 – in the first year of the Hochbahn-Ringlinie – it was still called „Flurstraße“ and stood in the middle of the forest. At that time there was only one platform and a simple entrance at the east end. In July 1924 the station was given the name Stadtpark. Only to be rebuilt again and renamed Saarlandstraße in 1970. For me it is a classic example of the beautiful and simple design of the very first underground stations in Hamburg.

At the beginning of December 2018 Hamburg’s newest metro station opened: It’s called „Elbbrücken“ and it is so far the last station on new metro line U4 reaching out to the boarderlands of the HafenCity. It looks very futuristic and it reminds me rather of an entrance into a space rocket than the underground…